Warehouse Jobs allows users to have more control over the processing of various jobs in the system including:

Note: the Jobs system does allow for the allocation of specific jobs to specific users, but does not allow users to be given ‘roles’ like ‘picker’, ‘packer’ or ‘replenisher’, so control of workflow on this level remains manual.

Warehouse Jobs allow the user to setup options that will be applied when sales orders are batched together, for more information please see How To: Setup a Picking Profile Configuration.

A final step of configuration would be to open the WARE screen from the command window and press the Scanning button. Within the dialog that pops up click Print Barcode List to access a sheet of barcodes with the user barcodes towards the bottom. These should be printed and provided in some manner to the users of the system. A suggestion for how/where this might be provided might be on the User’s ID card, name badge or something else which the user must always have on their person.

This feature and functionality are not active within the system by default. The user will have to have activated this within the System Values screen before they will be able to make use of Pick/Pack/Despatch Jobs within their instance of Khaos Control. When Sales Orders hit Khaos Control their associated invoices can appear at various stages of Sales Invoice Manager (SIM). The Warehouse Jobs process picks up once these orders have been deemed ready for picking and have been pushed into the Picking stage of SIM.

The process is as follows:

Problems with picking an order:

This feature and functionality is not active within the system by default. The user will have to have activated this within the System Values screen before they will be able to make use of Build Jobs within their instance of Khaos Control. At whatever point the user decides that stock needs to be built (whether in response to orders entering the system or just for stock to sit on a shelf) they go to the Stock Code to be build and press the Build button as per the current process. The following dialog will be displayed: 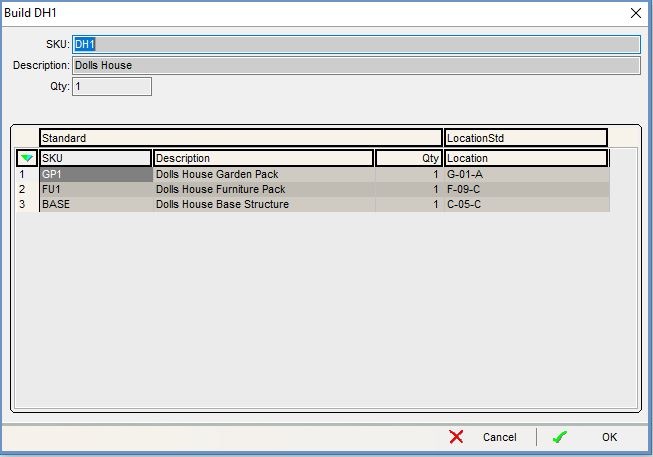 This will create a job which will be listed in the Warehouse Jobs Screen. This can then be allocated to an individual user so they get it as their next job when they request one from the system. This means that the system administrator/manager can ensure the right people do the builds. The process for builds is the same as for pick/pack/despatch. The user scans their ID, is given the build job and the build paperwork prints off for them. They then build the products and scan the build job barcode to complete the build process. The child items of the build will move to InBuild (as per configuration above) while the process is being performed. Once the barcode to complete the job is scanned the system will process the stock movements and adjust in the build parent to the appropriate amount for the build children which have been used.

This feature and functionality is not active within the system by default. The user will have to have activated this within the System Values screen before they will be able to make use of Replenishment Jobs within their instance of Khaos Control. The Replenishment screen within the SW Warehouse has new functionality associated with it. When the button ‘Create and Process Batch Movement’ is pressed this will create a job to move the quantities of product indicated by the user from the locations and to the locations of the configuration. This will instantly appear in the Warehouse Jobs screen. The user will then be able to go to the job and assign it to someone able to do stock replenishment if the warehouse only has specific users with the necessary skills for this. It is in this way that the warehouse manager/admin can control who does the replenishment if they do not want the system to allocate out the job to just anyone within the warehouse. The process is then the same as for pick/pack/despatch, the user scans their ID, is given the paperwork for the replenishment which they then follow to complete the replenishment task. The user then scans the barcode on the paperwork to complete the task and move the stock from their locations to the new locations.